© 2013 by Benn Kempster.
All rights reserved. No part of this information may be reproduced or transmitted in any form or by any means,
electronic, mechanical, photocopying, recording, or otherwise, without prior written permission of the author. 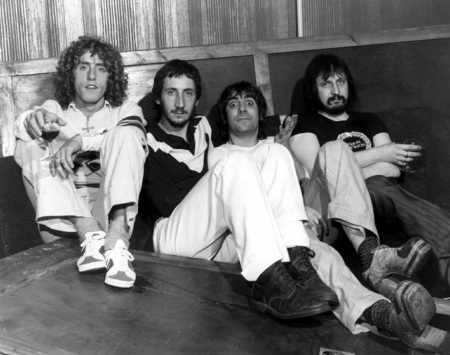 Photo: Harry Goodwin / Redferns
The mid to late 1990s saw a huge upgrade of The Who’s albums into the digital compact-disc age. This followed some very poorly produced “original” CDs from Polydor in the UK and MCA in the USA, as well as the 1994 release of a career-retrospective, 4-CD box set, “30 Years Of Maximum R ‘n’ B.” The “definitive” CD releases of the ‘90s expanded the scope of the original vinyl releases by including previously unavailable tracks. But the quality of the mastering process and numerous factual errors in the liner notes hampered them. This led to a great deal of frustration for some sections of the community, who were hoping that this most important of bands would receive the treatment they felt it deserved.

More recently, some of these definitive releases have been replaced by “Deluxe Editions,” featuring additional, previously unavailable material. This coincided with the first appearance of a digital, stereo, remixed release of the band’s seminal debut, “My Generation,” replete with appropriate additional tracks. But, again, the limitations of missing tapes has hurt the overall quality of the remixes, and mastering quality was again questioned by some fans.

Polydor in Japan has begun issuing what have been regarded as superior versions of the Deluxe Edition releases and has also included unique bonus tracks among some of them. For example, official releases of the original EP mixes of “Postcard” and “I Don’t Even Know Myself” are unavailable anywhere else digitally. This was also the only region from which a remix of the original “My Generation” mono tapes has been issued on CD, a criminal act in every regard given that the LP was the The Who’s first, and with the greatest respect to Japan, there’s no reason why they should be the only region to publish something as important as a digital, mono, remastered version of “My Generation.” In December 2012, a single-disc mono My Generation finally was released in the UK and Europe.

This “The Who In The Studio” project was borne out of a great deal of frustration with this release strategy. The Who has amassed one of the most-envied back-catalogues of all time; not necessarily in terms of quantity, but the historical, cultural and downright shuddering impact of their work is second to none. It’s a travesty that so much of this material is scattered around the four corners of the globe as the band is vitally important in the grand scheme of history’s great jukebox.

I have tried to collect in the same place, for the first time, as many available variations of each track The Who (and in their first guise, The High Numbers) recorded in the studio as possible. Admittedly, not every variation is accounted for. Instead, I’ve tried to concentrate on pulling different mix variations together, because as is the case in many examples, a different mix amounts to a different version in terms of the placement of different track elements. Mastering, however, tends to create more of a varnish or polish layer on top of a mix, so I have only included uniquely mastered versions if I believe they add something different to a mix already included. A notable example: the Steve Hoffman-mastered version of the “Who’s Next,” where I felt the listening experience is different (better) than what has been heard before. This, of course, is entirely subjective, and one’s sweet is sometimes another’s sour. This is also not intended to be viewed as audiophile comment on any of the sources referenced.

Bootlegs have been necessarily employed for their wealth of material, most notably for the tracks that were recorded by The High Numbers and made up the “Pye Acetate.” I was given copies of the acetate tracks from the original disc that Phil Hopkins acquired in 1998, and therefore, as so famously noted on the “Live At Leeds” album, pops and crackles are acceptable because they simply add to the vintage-vinyl feel of the tracks, as opposed to the clinical, “hospitalized” remastered versions on the “Odds and Sods” CD re-issue. Ditto for the “BBC Session” tracks: The official discs for these are, frankly, an embarrassment, so I have resorted to what I consider the best-available shady release, “Maximum BBC.”

The patchiness of mastering across various versions has led to inconsistencies in some sound levels, but I have not attempted to tamper with this. If a track from the very poorly (loudly) mastered “Odds and Sods” CD re-issue butts up against a beautifully mastered Hoffman “Who’s Next” track, please accept my apologies and refer complaints directly to Polydor.

I have tried to be consistent in terms of the split between stereo and mono mix variations and have separated them from each other. This is notable for all of the band’s output from “My Generation” up to and including “The Who Sell Out.” In the same vein, where no mono mix exists, I have included the original stereo mix and the Deluxe Edition stereo remixes of “Tommy,” and for “Quadrophenia” I included the original stereo mix and the 1996 remix but omitted the 2012 Deluxe Edition remix, as I don’t feel it improves on the 1996 version. The albums are presented in their running order based on the main UK album – note that the USA “The Who Sings My Generation,” for example, featured an alternate track listing. You will also notice that, where multiple versions of tracks exist outside of the album versions, I have grouped them together. Thus you have the benefit of hearing the three versions of “Mary Anne With The Shaky Hand” consecutively, as well as the multiple mixes and takes of the 1971 Olympic Studios tracks one after the other. I believe that helps provide context and progression towards the final version. All tracks issued on 1974’s “Odds and Sods” have been reintegrated to fit the periods in which they were recorded, as opposed to initially released.

Where studio dialogue has been (generously) included prior to or following the conclusion of a track on its CD release, I have separated such dialogue out and included it as a track on its own. I would like to have similarly separated the radio jingles and announcements that appear on “The Who Sell Out” from the tracks they precede or follow. However, on attempting this, I found that I would sometimes have to chop through the start or end of a note to be able to do it, and would rather abandon the desire to have stand-alone tracks than risk a chopped-up mess.

The original intention of this project was for me to create something of a personal box set – when looking at this site, it’s obvious that within the various sections, there’s no clear chronological order to things; that was never intended to be the case. I originally intended this set to follow the original album release and for ‘bonus tracks’ to then take over a-la the “Deluxe Edition” format – which I think works well.

What is also hampering the creation of a truly chronological look at the band in the studio is the fact that specific dates are tough to come by for much of their material; with “Tommy” and “Quadrophenia” for example, each track was created over a period of time, leaving no actual date on which the track was finished. What you have here, in essence, is a set of liner notes to accompany a fictitious “Super Deluxe Edition” of The Who’s studio career.

No live material is included here, except for “My Generation” from “The Smothers Brothers Comedy Hour” show in 1967 and the tracks performed on the BBC’s “Old Grey Whistle Test” (“The Relay” and “Long Live Rock) in 1973. These feature a live vocal over a pre-recorded backing track and, as such, are more studio than live renditions. “Naked Eye” and “I Don’t Even Know Myself” were similarly performed on New Year’s Eve 1970 on “The Lulu Show,” but while bootleg versions of these tracks exist, I have not located copies of sufficient quality to warrant their inclusion here.

Somewhat controversially, I suppose, this set ends with the remnants of “Quadrophenia” and excludes the fine musical material from “The Who By Numbers” and “Who Are You.” This simply is a result of there not being ANY additional studio material “out there” over and above the album tracks. If and when any such material appears, it will be included, along with “Face Dances,” “It’s Hard” and “Endless Wire.”

The process of researching and writing this project has been exhausting, but above all and much more than anything else, it has been incredibly good fun. Despite more than 20 years listening to and collecting this band, I have discovered more on each successive listening. Trying to get the combinations right has opened my ears to many of the greater subtleties of The Who’s music.

There’s at least a day’s worth of listening here, so if and when you can, try and track this lot down. And, if the wife’ll let ya, shut yourself away in your “listening room,” crank the volume up and sit back and revel in the history of The Who In The Studio.
--  Benn Kempster,
December, 2013
Powered by